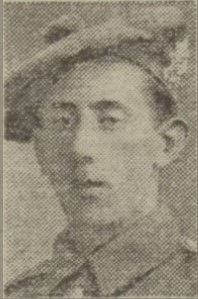 Formerly 12th Battalion Black Watch. David is believed to be the brother of Pte Alexander Smith Webster, 4432, 16th Battalion Australian Infantry, who was killed in action, 31.08.1916.

Mr Robert Webster, David Street, Broughty Ferry, has been informed that his son, Private David Webster, Labour Company, Black Watch, has died in a casualty clearing station near Cologne from pneumonia.  Deceased, who was 24 years of age, had been three years in the army, and prior to enlistment was in the employment of J. T. Inglis & Sons, Dundee.

Can you tell us more about David Webster'? Some additional facts, a small story handed down through the family or perhaps a picture or an heirloom you can share online. Contact our curator...