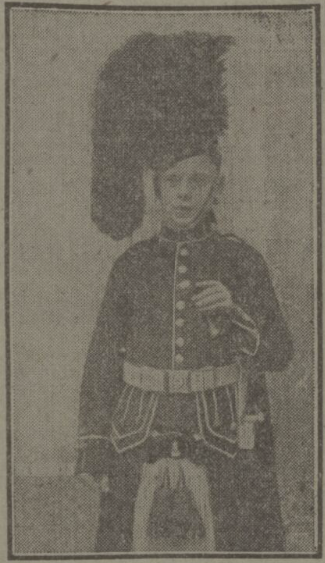 A PHOTO WHICH ARRIVED TO LATE.

Another Dundee member of the 1st Black Watch who fell in the terrible battle of 9th May is Private John M’Donald Webster, 7 Dallfield Walk.  The absence of any news from Private Webster himself since April made his parents anxious as to his fate, and the sad intimation of his death has now been made known by the receipt of a letter from Sergeant A. Messer, No. 6 Platoon, B Company 1st Black Watch.

A pathetic circumstance is, at the request of Private Webster, a photo of himself had been sent to the front, as he intended to hand it over to a sister in the Ronen Hospital who had been very kind to him when he was under treatment there recently for a wound.  But Webster had fallen before the photo had arrived.

Sergeant Messer, writing under date 25th May, states:–“I have received the photo of your son, and unfortunately have to be the writer of sad news to you.  Your noble son was killed on 9th May by a German ‘Jack Johnson.’  Death was instantaneous.  You have the whole platoon’s sympathy in your bereavement.”

Deceased was nineteen years of age, and prior to the outbreak of war was employed by Messrs Bell & Sime.  He belonged to the 3rd Black Watch, and on mobilisation was transferred to the 1st Battalion.  He went to the front in August.  Private Webster was wounded twice previously, but on neither of these occasions got home to hospital in this country.

Can you tell us more about John McDonald Webster'? Some additional facts, a small story handed down through the family or perhaps a picture or an heirloom you can share online. Contact our curator...