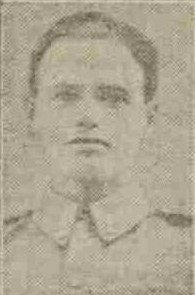 William has no known grave but is remembered on the Menin Gate Memorial. He was the brother of Pte Thomas Webster, 32331, Royal Defence Corps, who died 14.08.1917.

Mr Thomas Webster, 2 Annfield Row, Dundee, has been notified by the War Office that his son Private W. Webster, Royal Scots Fusiliers has been missing since 31st October.

Private Webster, who is 21 years of age, has seen three years’ service with his regiment, which was lying at Gibraltar when the war broke out, and left for Belgium only on 6th October.

Private William Webster, 2nd Royal Scots Fusiliers, who has been reported missing since 31st October, 1914, is now officially presumed to be dead.  Deceased who was 23 years of age, resided at 2 Annfield Row, Dundee, and was previously employed in Baltic Works.  He had been in the army for over three years, and was in the firing line for about two months prior to October.  His brother, Private Thomas Webster, is a member of the 2/4th Black Watch, and has been at the front for about four months.

Can you tell us more about William Webster'? Some additional facts, a small story handed down through the family or perhaps a picture or an heirloom you can share online. Contact our curator...