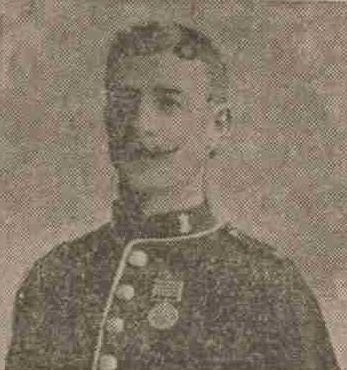 John has no known grave but is remembered on the Le Touret Memorial. Next of kin listed as Elizabeth Allen (Aunt) 186 Blackness Rd, Dundee.

Corporal John Weir, a well-known employee of the Dundee Corporation Tramways, has been wounded.  Corporal Weir belongs to the 1st Black Watch, and was put out of action on 9th May.  A report had gained currency that Corporal Weir had been killed, but on Saturday his Aunt, Miss M. Weir, 186 Blackness Road, received intimation that he had been wounded.  Corporal Weir had served in the South African campaign, and had completed his term with the reserve, but when the present war broke out, he left his occupation as a tramway conductor and volunteered for service.  Through the courtesy and fact with which he discharged his duties, Corporal Weir was highly respected by the travellers on the Downfield tramway route.

Official intimation has now been received of the death of Corporal John Weir, 1st Black Watch, a well-known employee of the Dundee Corporation Tramways.  Information came to his Aunt, Miss M. Weir, 186 Blackness Road, that he had been wounded in the severe fighting of 9th May.  His brother however, received news from several comrades to the effect that the corporal had been killed in action on that date.  This news has now been confirmed by the authorities.

Deceased, who was a tramway conductor, had served in the South African campaign, and had completed his term with the reserve, but on the outbreak of war he again volunteered for service.  On the Downfield tramway route he was greatly respected by the passengers, and was a most courteous and obliging official.

Can you tell us more about John Weir'? Some additional facts, a small story handed down through the family or perhaps a picture or an heirloom you can share online. Contact our curator...