We need you to tell us more about the life and times of David D. Whitelaw 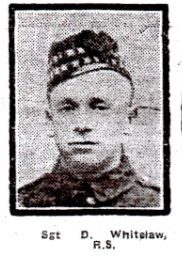 Prior to the war, Sergeant David Whitelaw worked at Cox Bros. jute mill in Lochee where he was first a jute preparer and then a jute overseer. He was attested on 8th March 1915 and joined on the 3rd April 1915. His medical record shows he was 32 years old, 5ft tall, weighed 118lbs and had a 36 inch chest. His health was declared good.

David died of wounds on 18th May 1916 he received whilst fighting in a town called Merville. He is buried in Merville Communal Cemetery. Following his death, his wife, Lizzie, was awarded a pension of 19s 6.d, along with the British War and Victory Medal.

Can you tell us more about David D. Whitelaw'? Some additional facts, a small story handed down through the family or perhaps a picture or an heirloom you can share online. Contact our curator...