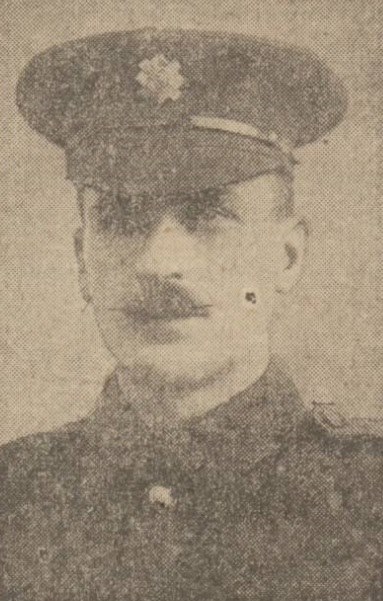 TWO DUNDEE GUARDSMEN KILLED IN ACTION. Two Dundee members of the Scots Guards are officially reported killed.
Mr Richard White, 17 Mortimer Street, has been notified that his son, Pte. William White, was killed in action on 16th Sept.
Deceased soldier, whose photograph is reproduced above, was 26 years of age. He served his apprenticeship as a butcher with Mr J. Clark, Strathmartine Road, Dundee, and a number of years ago emigrated to South Africa, where he was employed in Durban by Sparks & Young, Ltd. Private White returned to Dundee about eighteen months ago, and joined the machine gun section of the Scots Guards. He had been in the firing line for over a year.
A son of Mr White is serving at the front with the Canadian Expeditionary Force. The Courier, Friday, 13 October 1916, 4.

Can you tell us more about William White? Some additional facts, a small story handed down through the family or perhaps a picture or an heirloom you can share online. Contact our curator...