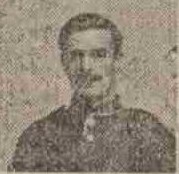 Few men hold such a unique record of promotion as did Sergeant-Major William Campbell Whyte, of the 1st Battalion Black Watch, who died at Rouen on 22nd Nov. from wounds received in action.  Sergeant-Major Whyte, who belonged Dundee, was an old High School Bursar.  He was captain of the football team of his regiment, and acted as Scoutmaster to a Lancashire company last year.

On August 3 he was entrusted with the responsible duty of bringing the Black Watch colours from Aldershot to the depot at Perth.  While stationed at Aldershot his good marksmanship won him many prizes.

Deceased held the rank of sergeant prior to the outbreak of war, but had earned for himself promotion as acting company sergeant-major when he was severely wounded.  He has two brothers serving their country___one in the navy and the other a reservist from Canada with the 1st Royal Dragoons.  Sergeant-Major Whyte, who was only 28 years of age, leaves a widow to mourn his life.

Can you tell us more about William Campbell Whyte'? Some additional facts, a small story handed down through the family or perhaps a picture or an heirloom you can share online. Contact our curator...