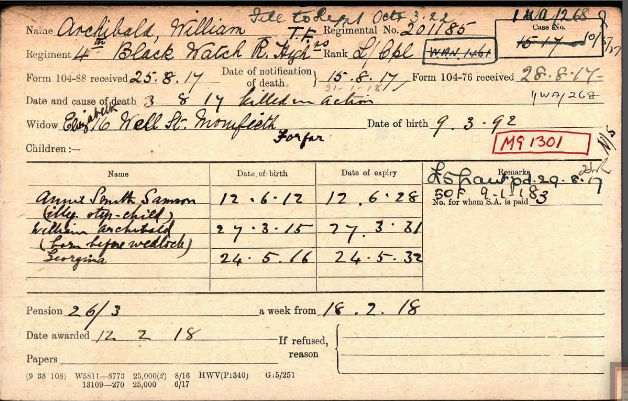 For reasons unknown this man is not listed on the original Dundee Roll of Honour.

Another Monifieth name has been added to the roll of fame.  Information reached Monifieth this morning that Private William Archibald, Black Watch, made the supreme sacrifice at the front on Thursday, 2nd August.  The sad news was conveyed to his wife, who resides at Well Street, Monifieth, in a letter from a Black Watch officer, who comes from Monifieth.

Deceased joined the colours in May, 1915, and has been at the front for over a year.  He came through the Somme offensive and subsequent battles in which his regiment was engaged without a scratch.

“Archie” was a genial friend in the district, where his talent for social entertainment was widely taken advantage of.  Many whom he has cheered with his merry prattle will learn with deep regret of his demise.  Prior to his military service he was employed as an electric craneman with Messrs James F. Low and Company, Limited, Monifieth.

Can you tell us more about William Archibald'? Some additional facts, a small story handed down through the family or perhaps a picture or an heirloom you can share online. Contact our curator...