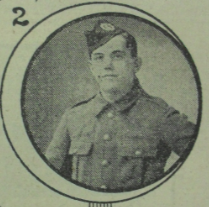 Private Hugh Williamson of the Cameron Highlanders, whose death is reported, is a brother of Mrs Smith, 25 Dundonald Street, Dundee.  Two years ago he went with his parents to Govan, where, before joining the colours in December last, he was employed as a clerk.  He was 25 years of age, and before leaving the city was employed with Messrs Langlands & M’Ainsh, Seagate Sawmills.  Beyond the fact that he was killed in action on 23d April no information is to hand.

Can you tell us more about Hugh McDonald Williamson'? Some additional facts, a small story handed down through the family or perhaps a picture or an heirloom you can share online. Contact our curator...