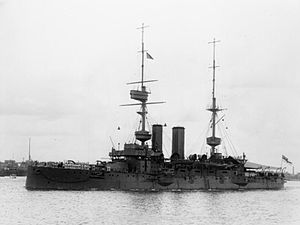 H.M.S. “Bulwark” was anchored of Sheerness 0n 26 November 1914 when she was destroyed by a large internal explosion with the loss of 736 crew members. There were only 14 survivors of the explosion with 2 of these dying later in hospital. The explosion was believed to have been caused by the overheating of Cordite charges which had been placed adjacent to a boiler room bulkhead.

In terms of loss of life, the explosion on H.M.S. Bulwark remains the second most catastrophic explosion in the history of the UK, killing 738 sailors. The most deadly explosion in British history was that of H.M.S Vanguard, caused by a stokehold fire detonating a magazine, at Scapa Flow in 1917.

Wormit has a more than ordinary interest in the tragic disaster which befell the Bulwark.  Amongst those who perished was Engineer- Lieutenant W. Wood, son of Captain Wood, Wormit.  In the Wormit U.F. Church on Sunday touching reference was made to the Lieutenant’s kindly personality.  He was beloved of all who knew him.  His cleverness was never obtrusive.  His modesty made people like him at first sight.  There was a winsomeness and charm about him which his intimate friends felt and admired.

Can you tell us more about William Andrew Wood'? Some additional facts, a small story handed down through the family or perhaps a picture or an heirloom you can share online. Contact our curator...