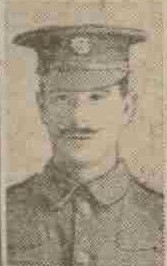 David has no known grave but is remembered on the Thiepval Memorial. David was the brother of Guardsman Alexander Jolly Anderson, 13528, 3rd Battalion Scots Guards, who died of pneumonia, 31.03.1915 & Sgt George Anderson M.M. 8836, Machine Gun Corps, who also served and returned home safely.

Mrs Anderson, who resides at 35 Church Street, Dundee, has received official intimation that her son Private David Chalmers Anderson, Scots Guards, was killed in action on the 16th of last month.  Prior to enlistment Private Anderson was a member of the Glasgow Police Force, and had been with the constabulary for four years.  A son of Mrs Anderson Private Alex. Anderson, also of the Scots Guards, died of pneumonia some five weeks after enlistment.  A son is at present in training with the Scots Greys.

Can you tell us more about David Chalmers Anderson'? Some additional facts, a small story handed down through the family or perhaps a picture or an heirloom you can share online. Contact our curator...