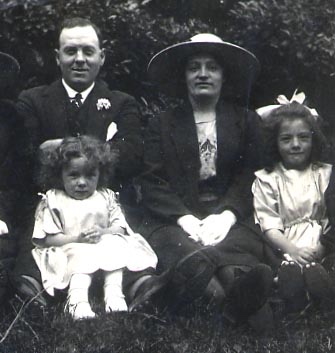 George and wife Williamina (Mina), with daughters Mabel and Mina, taken about 1923.

Originally from Whitehills, Parish of Boyndie, Banff, George’s family moved to Dundee in 1900. One of 6 children, George was the second youngest, with 4 brothers and 1 sister.

George’s military records were likely lost in the fire at the war records office during WW2 and so little is known of George’s service. He survived the war but is believed to have sustained a shrapnel wound to his neck and was also the victim of a gas attack. He often suffered bad headaches which were possibly related to his injuries and died at the relatively young age of 56.

George’s eldest brother, Robert, also served in the war but died from wounds on 8.5.1918. His younger brother, Stewart, emigrated to Canada, served with the Canadian Forces and survived the war.

Can you tell us more about George Raeburn'? Some additional facts, a small story handed down through the family or perhaps a picture or an heirloom you can share online. Contact our curator...