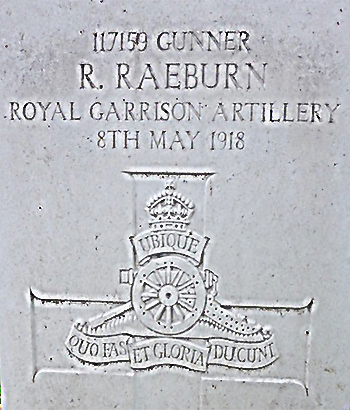 Robert was born in Whitehills, Banff and came to Dundee in 1900 with all the family, initially living in Baffin Street.

According to a war diary of the 249th Siege battery, Robert’s battalion left Folkstone to Boulogne and from where they were stationed after that they took part in the action along the Menin Road during 1917. At the time of Robert’s death they must have been involved in the Battle of Lys etc.

Robert’s great niece has visited a number of the places mentioned in the war diary and also his grave at Poperinghe on a number of occasions. In 2015 she bought one of the ceramic poppies from the Tower of London in Robert’s memory and also had his name read out.

Can you tell us more about Robert Raeburn'? Some additional facts, a small story handed down through the family or perhaps a picture or an heirloom you can share online. Contact our curator...