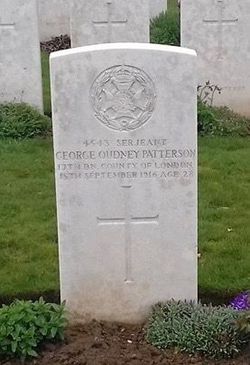 WHILE LEADING AN ATTACK ON THE ENEMY.

Intimation has reached Dundee of the death in action of Sergeant George Patterson, of the London Regiment, the second of three soldier sons of the late Mr James Patterson, who for many years was in the employment of Baxter Bros. & Co., Limited, Dens Works.

An officer states that deceased who was one of the most popular sergeants in the company, was killed instantly by a German bomb while he was leading his men in an attack.  It was mainly owing to the fearlessness which he and others displayed that a strong line was taken and a severe defeat inflicted on the enemy.

Deceased had been at the front for about eighteen months, while his two brothers have been on active service for a similar period.  The eldest brother is Captain William Patterson, for some time attached to a Seaforth battalion as medical officer.  He was wounded fully a year ago at the taking of the Hohenzollern Redoubt, but returned to the front early in the present year.  The youngest brother, John, is also with the R.A.M.C.  Sergeant Patterson, previous to joining the army, was a gardener in the employment of the London County Council.  He was 27 years of age.

Can you tell us more about George Oudney Patterson'? Some additional facts, a small story handed down through the family or perhaps a picture or an heirloom you can share online. Contact our curator...