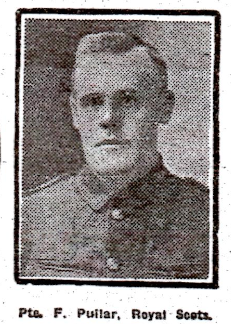 Frederick has no known grave but is remembered on the Arras Memorial. He was the brother of Pte Robert Pullar, S/21643, 1st/7th Battalion Argyll & Sutherland Highlanders, who died of wounds 11.04.1918. and L/Cpl Joseph Pullar, 13004, 15th Battalion, Highland Light Infantry, who returned home safely.

Mr William Pullar, 150 Hilltown, a constable in the Dundee Police Force, yesterday received official intimation that his son, Private Frederick Pullar, Royal Scots, had been killed in action on 28th April.  Mr Pullar has five sons in the army, and this is the first break.  Deceased, who was 27 years of age, joined in January, 1915, and a year later he was despatched to France, where he had served until, he was killed.  Another of Mr Pullar’s sons is shortly to join the colours.

Can you tell us more about Frederick Pullar'? Some additional facts, a small story handed down through the family or perhaps a picture or an heirloom you can share online. Contact our curator...