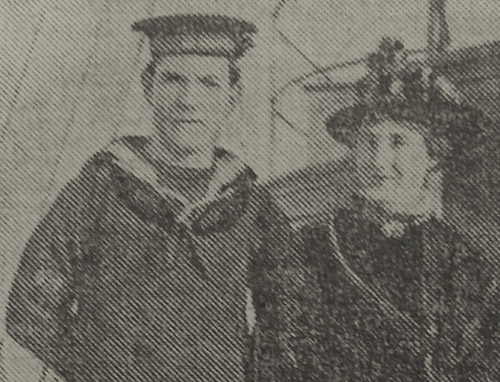 David Sadler and his wife Jemima

David died from injuries received following the Halifax explosion that occurred on 6 December 1917, in Halifax, Nova Scotia.  He had just returned to the family home at 1370 Barrington St, Halifax, when the massive explosion occurred, sadly the explosion instantly killed his wife Jemima Sadler and their 14 month old daughter Janet Powers Sadler. The family are all buried in Fairview Cemetery, Halifax.

The Halifax explosion was a maritime disaster that occurred in Halifax, Nova Scotia on 6 December 1917, when the Norwegian Steamer “Imo” collided with the French Steamer “Mont Blanc” carrying a cargo of explosives. A fire started after the collision which ignited the “Mont Blanc”s cargo causing a massive explosion that devastated the Richmond District of Halifax. It was the largest man made explosion before the nuclear era.

Approximately 2,000 people were killed by debris, fires and collapsed buildings, and an estimated 9,000 were injured.

David emigrated to Canada aboard the S.S. “Ionian” from Glasgow to Montreal, landing November 14, 1911. He and his two brothers Sturrock and Wilfred, settled in Winnipeg. Prior to the war David served as a Signaller with the 79th Regiment, Cameron Highlanders of Canada, but did not enlist with the C.E.F, (or at least was not accepted). He married his wife Jemima Powers at 120 Spence St, Winnipeg on April 16, 1915, the day before he enlisted in the RCNVR. Together they had one daughter, Janet.

On the morning of December 06, he had just arrived home to 1370 Barrington Rd when the explosion hit, instantly killing his wife and baby daughter with David receiving terrible injuries from which he would die a short while later. According to the Halifax Explosion Death Registration Book, the family were buried at Fairview Cemetery, Halifax. Sadlers mother was asked post war, to provide any details as to the location of her son’s grave, she never replied. David’s Circumstances of Casualty card noted that no memorial register was to be sent to his mother at her specific request. The Canadian Virtual War memorial has him recorded as having no known grave, but remembered on the Halifax Memorial.

According to letters from his sister within his service file, his sister states that she was a school teacher.

David’s older brother also served with the Canadians during the Great War, he was  Pte Sturrock Miller Saddler 71095, of the 27th Battalion, Canadian Infantry, Sturrock survived the war, and died 23.07.1959.

Can you tell us more about David Robertson Sadler? Some additional facts, a small story handed down through the family or perhaps a picture or an heirloom you can share online. Contact our curator...