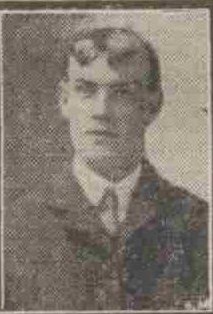 A footballer, well known in Dundee and Forfar, Sam Whyte, who was a reservist in the Black Watch, and was sent abroad with the Expeditionary Force, has been seriously wounded in battle, and at present lies in a French hospital.  Mrs Whyte the footballer’s wife, is at present residing in Forfar, and intimation of her husband’s illness was conveyed to her by the Rev. R. R. Walker, chaplain to H. M. Forces.  The communication was written in one of the field hospitals, and in it Mr Walker states :__

“I am writing to say that your husband is in hospital seriously wounded.  The doctors are hopeful for his recovery, but I feel it only fair to you to let you know the wound is serious.  Your husband has done his duty nobly and truly as a soldier in time of our nation’s great need, and you can justly feel proud of him.  Whyte was signed on by Forfar Athletic at the end of last season, previous to which he played for Dundee Hibs.

Private David Whyte, 1st Black Watch, who was killed in action on 9th May, was a native of Forfar.  Private Whyte was a younger brother of Sam Whyte, the well-known Dundee Hibs and Forfar footballer, who was severely wounded in the retreat from Mons, and has since received his discharge.

Can you tell us more about Samuel Whyte'? Some additional facts, a small story handed down through the family or perhaps a picture or an heirloom you can share online. Contact our curator...