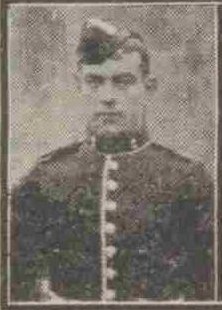 David has no known grave but is remembered on the Le Touret Memorial. He was the brother of L/Cpl Thomas Whyte, 19895, 10/11th Battalion Highland Light Infantry, who was killed in action, 14.08.1917 and Pte Samuel Whyte, 617648, Labour Corps and Pte Alexander Whyte, 62061, Labour Corps, who both also served and returned home safely.

Private David Whyte, 1st Black Watch, who was killed in action on 9th May, was a native of Forfar.  Private Whyte was a younger brother of Sam Whyte, the well-known Dundee Hibs and Forfar footballer, who was severely wounded in the retreat from Mons, and has since received his discharge.

Can you tell us more about David Whyte'? Some additional facts, a small story handed down through the family or perhaps a picture or an heirloom you can share online. Contact our curator...