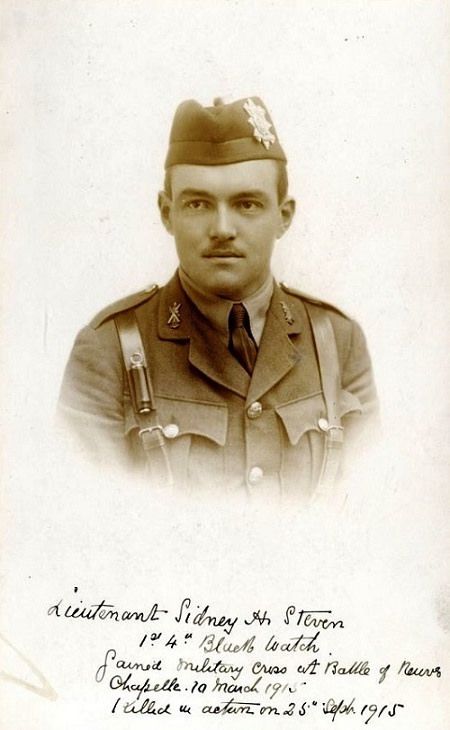 Lieutenant Sidney Herbert Steven studied at Dundee High School before enlisting as a pre-war Territorial in ‘Dundee’s Own’, the 4th Black Watch Battalion where he was commissioned in April 1914.

He received the Military Cross for ‘conspicuous gallantry on 10th March, 1915,  at Neuve Chappelle when he commanded the leading platoon of his Battalion in the attack, and gained his objective notwithstanding the heavy enfilading fire to which his men were exposed’.

According the the St Andrews University Roll of Honour Sidney was awarded the Military Cross on 08.05.1915 “For conspicuous gallantry on the 10th March 1915, during an attack at Neuve Chapelle, when he showed great dash in command of a party which advanced over the open and captured many prisoners and an enemy machine gun”.

Is Awarded Military Cross, For Distinguished Services at Neuve Chapelle.

Lieutenant Sidney H. Steven, of the 4th Black Watch, has been awarded the Military Cross for Distinguished Services at Neuve Chapelle.

Official intimation of this award was received in Dundee to-day, and as this is the first honour which has come to a member of the Dundee Territorial Battalion the announcement is of more than usual interest.

The news is contained in a letter from Colonel Walker, who says :―

I have just received an intimation from General Headquarters that Lieutenant Sidney H. Steven has been awarded the Military Cross for Distinguished Services at Neuve Chapelle.  We are greatly delighted that such an honour should have come to the battalion.  No one has deserved it more than the recipient.  He is a splendid fellow, and has been of the greatest service to me and his company commander ever since he came out.  I have just come back from congratulating him in the trenches.

Lieutenant Steven is the second son of Mr Robert Steven, solicitor, Dundee.  He joined the 4th Black Watch after passing his examination as a chartered accountant, about four months before mobilisation.  He was associated with the firm of Messrs R. C. Thomson & Murdoch, C.A., with whom he served his apprenticeship, Lieutenant Steven’s brother, who was a solicitor in Stirling, is a second-lieutenant in the second line of the 4th Black Watch.

Lieutenant Sidney H. Steven, M.C., was the second son of Mr Robert Steven, solicitor, Barnhill, and joined the 4th Black Watch some four months before mobilisation. He served his apprenticeship with Messrs R. C. Thomson & Murdoch, C.A., and was associated with that firm before joining the colours. He had successfully passed his examination as a chartered accountant only a short time previously.  He was one of the youngest and most popular officers in the battalion, and distinguished himself in all the engagements in which the Dundee Territorials have figured, being awarded the Military Cross for Distinguished Services at Neuve Chapelle.  His brother, Lieutenant Harvey S. Steven is at present at the front with the 4th Black Watch, having returned to join the battalion last week after visiting his parents and friends in this district.

Can you tell us more about Sidney Herbert Steven'? Some additional facts, a small story handed down through the family or perhaps a picture or an heirloom you can share online. Contact our curator...