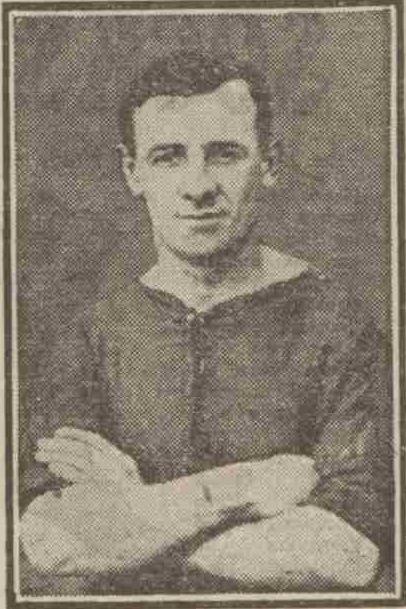 Linn Signs On Again For Dundee Hibs. William Linn signed on last night for another season with Dundee Hibs. Since he came to tannadice Park last season as a junior he has greatly improved, and at inside left he has made his mark. Up to the present Hibs have signed on the following players:- Elrick, Izatt, White, Boland, Low, Ross, Scrimgeour, Linn, and Black. The team will be complete in a few days, as there are a few more players to be added to the list.

Full Team Serving With The Colours

Edward McDonald, left half of the Dundee Hibs, has joined the Cameron Highlanders. This brings the total of Tannadice players serving with the colours up to eleven, i.e., Sutherland, Welsh, Boland, Crawford, McDonald, Stoessel, Flood, Linn, Cheyne, Cavanagh, and Brown.

The number of Dundee Hibs’ players who have joined the colours compares favourably with the roll of honour of any Northern club.

The following players attached to the club are serving in the forces:-

“On Wednesday night we arrived in camp, and it was just like being at home to see the old dug-out again. In the latest draft which arrived were many Dunde men, and I spent a few happy minutes with Dundee’s old goalkeeper, Masterton. What a treat it was to see the like of him coming into the ‘Drake.’

“We also have a junior, Devlin by name, in our company, who used to play on the ‘Gussie Park.’ I was telling the O.C. About them, and he smiled when I told him that the ‘Drakes’ would have a crack football team when they went on garrison duty. Willie Linn, of the Dundee Hibs, is here too, so that with a little organisation there should be little difficulty in establishing a Dundee F.C. out here.”

Linn, the Dundee Hibs tricky forward, who has been doing military duty, is meantime in Dundee, and took the chance of a game for his club against Broxburn.

Dundee Hibs have to-day signed Willie Linn, an ex-Hibs player, who was last year with St Johnstone. He is a clever forward and should prove a decided acquisition to the Tannadice Club. He will be included in the Hibs team to oppose St Johnstone at Perth to-morrow night in the return Central League match.

Notes From Field And pavilion.

Jimmy Smith, the junior international inside left, has re-signed for Dundee North End, despite having received several offers from other clubs. Willie Linn, the Dundee Hibs’ forward, has also signed for the “Dokens.”

North End were easily masters of the situation at Gussie Park, where they entertained the Enders from the west. Here again the feat of scoring four goals was performed by a centre forward, this being Speed’s quota before the close of a rather one-sided game, in which the First leaguers were always prominent. Willie Linn had the “Dokens” other goal ; the centre forward accounting for West End’s solitary point.

Can you tell us more about William Linn'? Some additional facts, a small story handed down through the family or perhaps a picture or an heirloom you can share online. Contact our curator...