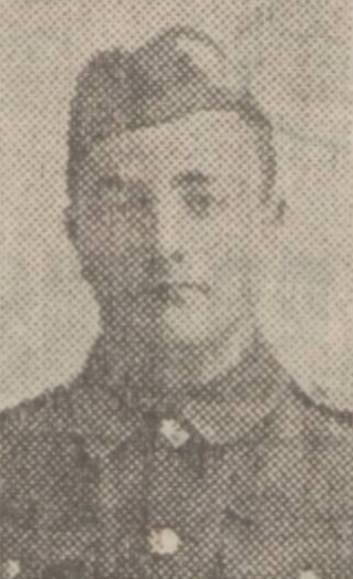 S-43164 Pte. Alexander Linn, 9th Black Watch, was killed in action on 29 March 1917, aged 24.
The son of Mrs Linn, 19 James Street, Dundee, he was born in Montrose and had been employed as a jute preparer in Manhattan Works before the war.
Linn was a well-known junior footballer with North End. A brother had played with Dundee Hibernian.
Pte. Alexander Linn is buried in Faubourg D’Amiens Cemetery, Arras, Pas de Calais, France, II. M. 6.DUNDEE FOOTBALLER KILLED. Official intimation has been received by Mrs Linn, 19 James Street, Dundee, that her husband, Private Alexander Linn, Black Watch, was killed in action on 29th March. Private Linn, who was 24 years of age, had been in the army about two years. He had been employed as a jute preparer by Frank Stewart Sandeman & Sons, Manhattan Works, Dundee, and was well know in junior football circles, having played for North End. The deceased has two brothers serving with the colours. One of them, Private W. Linn, is also a well-known footballer, having played for Dundee Hibs. The Courier, Wednesday, 11 April 1917, 3.

But now dear brother, your pains are o’er,

In France you lie at rest;

But aching hearts you’ve left behind,

No one but God knows best.

In the bloom of his life death claimed him,

In the pride of his manhood days;

None knew him but to love him,

None mentioned his name but with praise.

Inserted by his sister and brother-in-law, Mr and Mrs William Mason, 13 Wolseley Street.

Can you tell us more about Alexander Linn'? Some additional facts, a small story handed down through the family or perhaps a picture or an heirloom you can share online. Contact our curator...