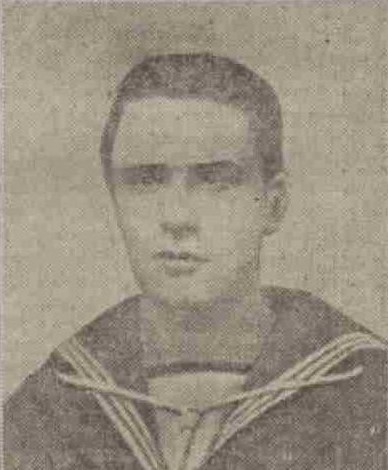 DUNDEE SIGNALLER ON THE LAURENTIC.

Signaller Victor Yule, A Dundee man, has been lost in the disaster to the auxiliary cruiser Laurentic.

Signaller Yule, who was about 20 years of age, was the son of Captain George Yule, 13 Blackness Avenue, Dundee.

Prior to joining the Royal Naval Division he was engaged in the office of Messrs A. & J. Guild, stockbrokers, 31 Albert Square.  This was his first voyage and as his name does not appear in the list of survivor’s little hopes are entertained as to his safety.  His brother, George, journeyed from Lema, in South America, to this country and joined the 4th Black Watch, but he was recently transferred to a cadet corps.

News has been received, which leaves no room for doubt, that Signaller Victor Yule, R.N., son of Captain George Yule, Blackness Avenue, Dundee, is amongst those who have lost their lives in the Laurentic disaster.

Signaller Yule was previous to the war employed with a Dundee firm of stockbrokers.  He enlisted nearly a year ago.  Deceased was an old Harris boy, and took a keen interest in all branches of athletics.  He was a genial kind-hearted lad, beloved by all his companions, and much sympathy is extended to his parents in their loss.  Signaller Yule was a cousin of Albert Stiven, whose death is also reported to-day.

Young Dundee Hero who only gave in to death.

“Yes its some operation to know that you won the praise and respect of his shipmates by the way he stuck to his oar before he pegged out, poor little chap said Captain Yule as in his office in the Board of Trade buildings at the corner of Gellatly St, and Dock St he told the story of the death of his son, Signaller Victor Yule, a member of the crew of the ill fated Laurentic which was torpedoed and sunk off the Irish Coast.

It was a sad story of heroism and fortitude and though told in the simple, straight language of the seagoing man, one could easily picture the 19 year old lad, not yet toughened by the sea life, for it was his first voyage, pulling pluckily with his oar throughout the bitterly cold night while death stared him in the face.

There were 35 men in the boat Signaller Yule found himself allocated to after the second torpedo had torn the hull of the Laurentic and made it evident that the vessel could remain afloat but a few minutes. That night was a terrible one. A heavy swell was running and an icy cold wind bit into the very bones of the half clad men. Even the most experienced and hardened of the sailors were shivering violently and groaning with the pains of frostbite before an hour had elapsed. In a vain endeavour to attract the attention of some passing vessel, flares were lit in the boat. They burned brightly for a long time but their glare died away without bringing any help to the drifting sailors. Then the last light went out, and they were left alone in the darkness.

For hours the half clad crew of the boat pulled at the oars, Victor Yule taking his place with a fortitude and cheerfulness which were amazing in one so young. Soon it became evident that some of the men would not survive the dreadful ordeal. With that peculiar perversity of nature the cold claimed for its victims those who might have been thought to be the strongest. One by one the men fell forward on their faces on the bottom of the boat, and lay there quite still. Some comrade would make a vain endeavour to rouse the stricken men, but it was only to realise that they were beyond human aid.

When the dull dawn with no promise of succour began to break on the boatful of dead and living men, Signaller Yule was still at his place pulling stiffly and mechanically at his oar. Ten of his shipmates were alive and 24 dead. One of the 10 was beginning to “go queer” and it became evident that his brain had been affected. He began to become a menace to the others, and Yule and his shipmates were forced to lash him to the seat to keep him from doing damage. Then suddenly, when all seemed lost, and nearly all of the living men had ceased to pull at the oars and waited in despair for death, a black shape loomed out of the semi-darkness and ran alongside them.

“It’s a Trawler,” said the Boatswain, who all along had been marvelling at the young signaller’s remarkable endurance “ Just a minute longer, young un’” Victor did not have the power to raise his young pain racked face to look, but he heard the words, and bent to the task of keeping the boats head to the sea with renewed vigour. Then suddenly he fell forward “Bear up young’ un” gasped the kindly boatswain ‘They’s comin’ to take us on board and let us get warm. The poor lad struggled up again, but his comrade knew all hope was gone. A second time he collapsed and even as helping hands reached out to aid him, the last spark of his young life flickered out.

When after the survivors had been brought to land the Bo’sun met another shipmate, named Signaller Burnett, who hailed from Dundee, He told him how Victor Yule had died, and asked him to break the news to his folks.” Tell them” he said “That he stuck to his oar to the last like the good-plucked little’ un he was.”

Victor was serving aboard when on the 23 January 1917, the 14,892-ton liner Laurentic, which had been converted into an Armed Auxiliary Cruiser, hit a mine laid by German submarine UB-40 off the coast of Northern Ireland. In her strong rooms were 43 tons of gold, in 3211 separate gold ingots, valued then at more than £5 million, being taken to the United States to pay for food, steel, and munitions which Britain needed to continue the war against Germany. The Laurentic sank so swiftly that 354 of 745 men aboard were lost.

Can you tell us more about Victor Davidson Yule'? Some additional facts, a small story handed down through the family or perhaps a picture or an heirloom you can share online. Contact our curator...