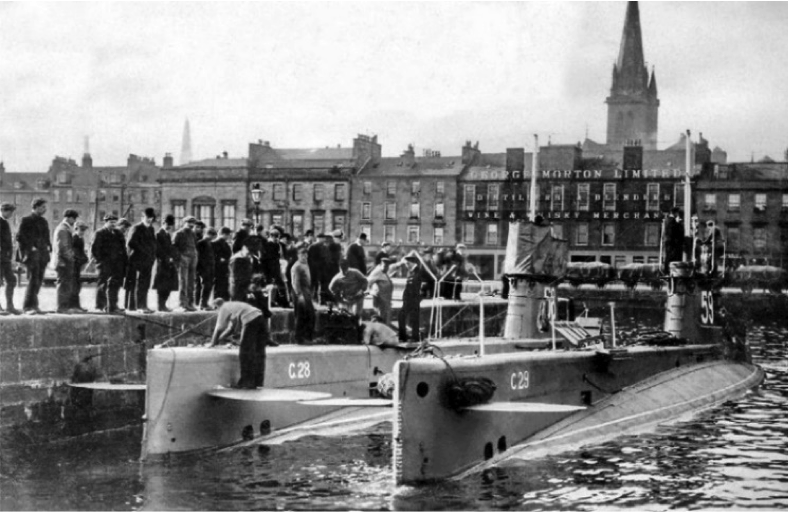 Submarines first operated from the Tay in the summer of 1908 and, in October that year, the Admiralty selected Dundee as one of the Royal Navy’s first permanent submarine bases. The 7th Submarine Flotilla took up permanent station at Dundee in November 1909.

The Dundee flotilla usually comprised twelve C class submarines and a small number of destroyers. The depot ship HMS Vulcan was moored in the Tay off Newport and a shore base at King William IV Dock included workshops at the West Graving Dock and a Marconi wireless station. The bulk of the flotilla would secure in King William IV Dock, but this had a tide-restricted entrance so three submarines at short notice for sea would generally lie at moorings in the river next to the depot ship.

The flotilla moored in the Tay quickly became a tourist attraction, enterprising pleasure boat operators were soon offering trips to see HMS Vulcan and the submarines. Dundee picture postcard publisher Valentines produced a number of popular images like that below. 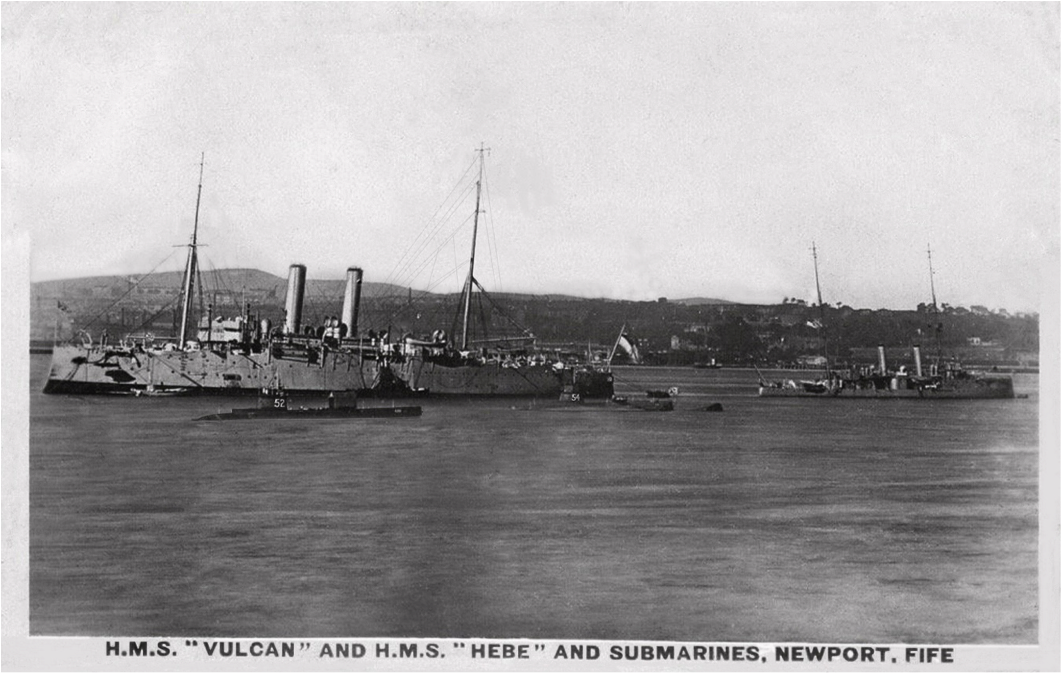 The Royal Navy had only commissioned its first submarine, HMS Holland 1, in 1902, six years before the Dundee flotilla was formed. And submarines based in the Tay would be at the forefront as, like naval forces around the world, the Royal Navy tried to work out how to use this new war-fighting technology.

Submariners played a full part in the life of the city and Leading Shipwright Dan Thorpe, a cabinet maker from London who joined the Navy in 1900, promoted popular boxing tournaments in Dundee’s Kinnaird Hall. He served in the Royal Naval Air Service during the Great War and died in the influenza pandemic that broke out in 1918.

The 7th Flotilla left the Tay for its war stations at the end of July 1914, a few days before the outbreak of war. But the years of intensive training and development undertaken at Dundee would contribute greatly to the effectiveness of the Royal Navy’s submarine service in the coming conflict.

Many officers who cut their teeth on submarines at Dundee went on to distinguished naval careers. Among those named in the 1913 Navy List, Colin Cantlie later commanded the battleship HMS Royal Oak and retired as an Admiral in 1945 while Geoffrey Layton escaped internment in Denmark in 1915 and, after flying his flag in the battle-cruiser HMS Hood in 1939, had the misfortune to be C-in-C China Station when the Royal Navy bases at Hong Kong and Singapore fell to Japanese in 1942.

Godfrey Herbert had an eventful career in submarines and ‘Q’ ships, decoy vessels fitted with powerful concealed armament. Hugh Marrack and George Thomson both reached flag rank, John Cull won fame as a naval airman and Sidney Winn was First Lieutenant in B11 when the submarine ran into the mine-infested Dardanelles and torpedoed the Ottoman battleship Mesudiye.

Captain Robert Johnson died in the sinking of the cruiser HMS Cressy in 1914 and Geoffrey White, who narrowly escaped drowning when he was swept overboard from the submarine C27 during a North Sea storm in 1913, was awarded a posthumous Victoria Cross after losing his life while in command of the submarine E14 during operations in the Dardanelles in 1918.

Submarines would return to the Tay at the start of the Second World War. Dundee-based submarines of the 2nd Flotilla were already on war patrol when hostilities began in 1939 and the 9th Submarine Flotilla was formed at Dundee in 1940 with Royal Navy submariners being joined by crews from France, Holland, Norway and Poland as these ccountries fell under the Nazi heel. Soviet submariners also operated from the Tay in 1944.