If you’re aged between 12 and 15 years old and you love cracking codes and puzzles and like comics then this is definitely an event for you. A hands on day finding out about secret codes used during World War One.

Are you aged between 12 and 15 years old? Do you love cracking codes and puzzles, creating comics, or doing both? Then come along to Great War Dundee’s unique event on Saturday 22nd June. The event will make you think differently about World War One, and how it relates to all of us today. Your ideas could even contribute to the development of an exciting new comic about the Great War, which will be launched later this year. The final comic will feature a story by Charley’s War creator Pat Mills.

The event starts outside The McManus: Dundee’s Art Gallery and Museum. You will then take a walk around different locations in Dundee city centre that link to Dundee’s war effort, locations you will identify by deciphering Caesar cipher clues released via Twitter. The walk will take around 1 hour to 1 hour 30 minutes, and participants will be accompanied by members of the Great War Dundee Partnership. Parents and carers are welcome to accompany the walk.

Following the walk, you will take part in a workshop at the Dundee Comics Creative Space in the Vision Building, Greenmarket. You will create World War One related storylines and artwork. The event concludes here at 2.30pm.

Please bring snacks, lunch and drinks, as they will NOT be supplied as part of the event.

Places are FREE but must be reserved. Please book here.

Would you like to be involved with the Great War Dundee project?

Please join us at 11am on Saturday 1 December in Lecture Theatre 2, Dalhousie Building, University of Dundee for the launch of the Abertay Historical Society’s 59th annual publication, Tayside at War.

Dr Elsie Inglis, who lost her life during the First World War, will be commemorated by a large-scale sand portrait for Danny Boyle’s Armistice commission Pages of the Sea

Say ‘Thank You’ to WW1 Generation

Poppyscotland and Legion Scotland today launched a mass movement to say “Thank You” to all who served, sacrificed and changed our world during the First World War. With fewer than 100 days to go until 11th November, the charities are calling on mass involvement from the public to mark the centenary of the end of World War One.

To launch the Thank You movement, a giant installation of eight-foot-high illustrated letters appeared in Dundee’s City Square. The public were invited to write their own personal messages of thanks directly on to the installation.

Dundee was chosen for the Scottish launch of Thank You as the city exemplified the collective effort made across Scotland, Britain and the Commonwealth, not only on the front line, but, importantly, on the home front as well.

The city had among the highest enrolment rate of any town in Britain, with an estimated 63 per cent of eligible men signing up. This equated to 30,490; more than 4,200 of whom made the ultimate sacrifice and thousands more who returned with devastating injuries. As a result of the high enrolment rate, women quickly answered the call and entered the many jute and munitions factories, and various engineering works.

Women also took on other roles which had previously been the reserve of men, and Dundee was one of the first cities to see female post office workers and police officers on the beat, and, by 1917, they were employed across the tramway system.

Dundee had long been known as the “women’s city”, but, during the War, many more women were drafted into the War-time labour force, including hundreds of redundant “fisher lassies” from the fishing towns around the north-east of Scotland and the Island of Lewis in the west.

Speaking at the launch, Dundee Lord Provost Ian Borthwick said: “It is vital that we recognise the contribution of the generation who sacrificed so much. Of course we remember those who selflessly answered the call and served their country so bravely, but the Thank You movement is also an opportunity to recognise the contributions of other groups that are often overlooked. Thousands of Dundonian women took up vital roles in the city’s factories, as they did the length and breadth of the country. To them, and so many others who helped changed our world, we say ‘Thank You’.”

Joining the Lord Provost of Dundee at the launch was local Police Constable Victoria O’Neil and Sarah King, who has just completed her engineering apprenticeship at the Michelin tyre factory in the city. Also in attendance was Dr Billy Kenefick, Chairman of Great War Dundee, a partnership formed to commemorate the First World War and its impact on Dundee.

PC Victoria O’Neil, from the Dundee City Centre Policing Team, said: “It has been inspiring to learn more about the contribution of women during the First World War, and, in particular, to learn that the city was one of the first in Britain to allow female police officers. My Thank You message is to them for their service, and for paving the way for greater equality in the workplace for future generations.”

Sarah King, from Michelin, said: “Dundee’s jute, munitions and engineering factories played a vital role in the War effort, and, without thousands of women taking on roles in these factories, the War may well have had a very different outcome. Their story is often overlooked and to them I say ‘Thank You’.”

The letters showcase a unique design by acclaimed artist Sarah Arnett, which brings the War’s legacies to life. From the “Munitionettes” who served in weapons factories to Indian infantrymen who served on the Western Front; from schoolgirls farming the fields to renowned war artists such as Paul Nash, a collage of images honours the diverse contribution of the First World War generation.

Everyone is touched in some way by the First World War and the generation who lived through it. The public is being encouraged to say “Thank You” through their family, community, place of work – or simply as an individual. The Thank You movement invites people to explore First World War heritage where they live and find reasons for giving thanks.

Mark Bibbey, Chief Executive of Poppyscotland, said: “We all have a connection to the First World War, and, for me, it is through both of my grandfathers. My paternal grandfather served in the Royal Welch Fusiliers on the Western Front from 1916 to 1918, while my maternal grandfather was in the Royal Army Service Corps attached to the London Yeomanry and served in Egypt, Gallipoli and Palestine/Sinai. We all have a reason to say ‘Thank You’ to this special generation.

“To the women who took on dangerous wartime roles in factories; to farmers who gave up their horses to the war effort; to the Macraes and Sassoons whose work has shaped our understanding of conflict; we should indeed say ‘Thank You’.”

“Whether your personal ‘Thank You’ is an event dedicated to those who made a difference in your community, a visit to a place of significance, or a simple tweet, there’s no limit to the ways people can take part. We are making a plea to every single person across Scotland to get involved and take a moment in this very significant year to say ‘Thank You’.”

Dr Billy Kenefick, from Great War Dundee, added: “Great War Dundee is honoured to be a part of the Thank You event installed in our city here today. It is a fitting tribute to everyone who supported the War effort and it will grant them the due recognition they deserve.”

Legacies of Resistance: The Struggle Continues

The Workers’ Educational Association (WEA Scotland) invite you to join us in learning more about the lives and legacies of those in Scotland who said ‘No’ to World War One.

Think of the impact of the First World War on Dundee and perhaps what comes to mind are the tragic losses afflicted on the 4th battalion Black Watch at the Battle of Loos in 1915 or the incredible support the city’s populace gave to the money-raising tank banks as the war entered its final year in 1918.

But what of the men who declared themselves as conscientious objectors (COs) and paid a high price after refusing to fight on the grounds of morality or religion?

With this year’s International Conscientious Objectors Day upon us, Michael Alexander talks to Great War Dundee historian Dr Billy Kenefick about the First World War men who refused to fight – and paid a high price.

The Conscientious Objectors Stone in Tavistock Square, London was unveiled on May 15 1994 by Sir Michael Tippett, Peace Pledge Union President and a one time conscientious objector.

Dundee’s contribution to the war effort was widely recognised but it was also a leading centre for the anti-war movement. At the time an anti-war newspaper – Forward, noted that Dundee ‘was fair hotchin’ wi conchies’ (conscientious objectors, those that refused conscription).

The Great War Dundee Partnership is also hosting a number of events on the 18th and 19th May to raise awareness of Conscientious Objectors. Tickets are still available. Find our more here …

At a time when fighting for King & Country meant everything, to make a stand against war was not an easy decision. Learn what it meant to be a Conscientious Objector during WW1, and about the men who took that stance. 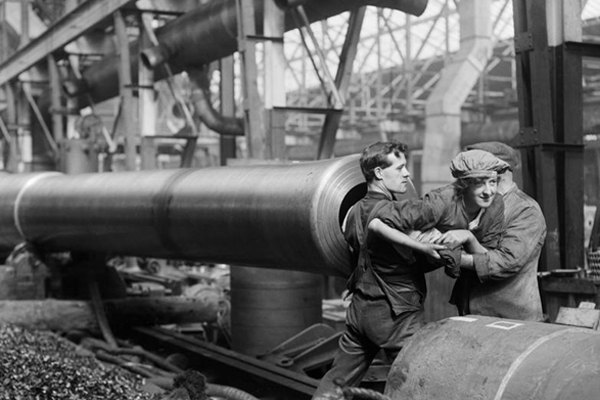 Great War Dundee is pleased to promote this project by Imperial War Museums.

2018 marks the end of the international commemorations of the First World War. Since 2014, events and activities around the globe have connected people with the impact of 1914-1918: on the world, nations, communities and individuals. The role of women is a story that is yet to be fully told.

In Spring 2018 the First World War Centenary Partnership, led by IWM, will present WomensWork100. This international programme of exhibitions, events, activities, creative responses, personal stories and digital resources will recognise and celebrate the working lives of women during the First World War and beyond showing how women, often unknowingly, pressed for progress in their working lives, against the backdrop of the struggle for female suffrage.

IWM is inviting organisations across the Centenary Partnership to take part in #WomensWork100. As well as offering a unique set of digital resources, IWM will run a vibrant digital campaign and present Partnership events across the country, from 6 February 2018 to International Women’s Day on 8 March 2018. Find out more at WomensWork100.